Skip to content
Owls are fascinating birds. That intense mysterious gaze, their often strange behavior, the thrill we get when we realize we’ve spotted one sitting in a tree or taking flight. Here are some fascinating owl facts that help explain why humans cherish and admire these amazing creatures. 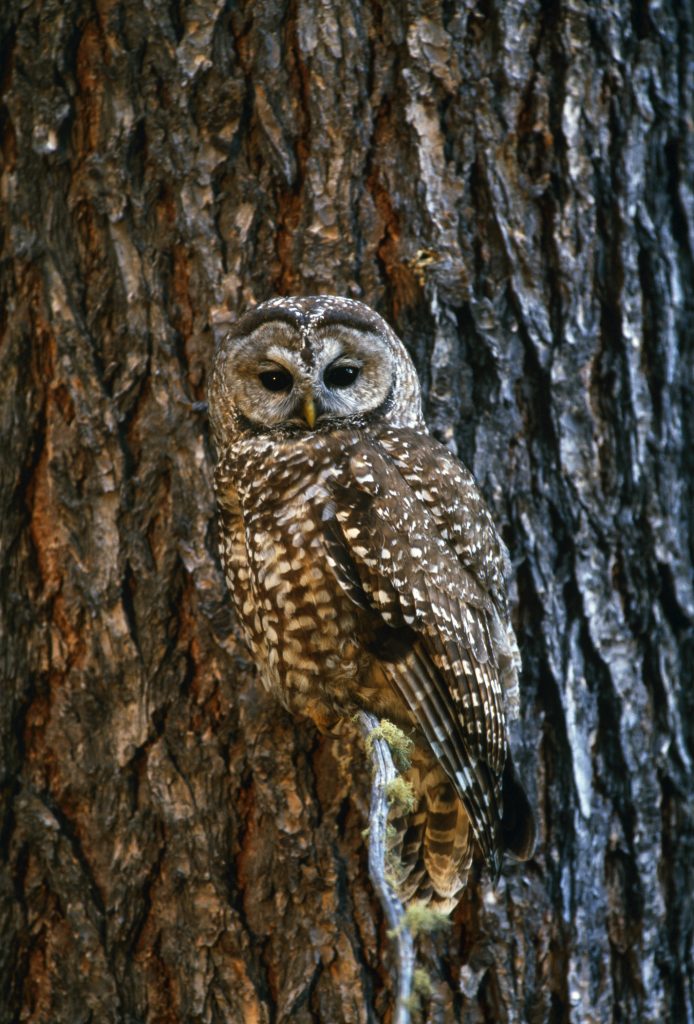 Move on, nothing to see here. That’s how the Mexican Spotted Owl in this photo wants you to read its body language. The feathers of most owls match the color of the trees they nest or roost in.

But body language can involve more than color. Pygmy, Great Grey, Snowy Owls and others that have ear tufts can close their eyes and elongate their bodies when they feel threatened, making them appear like a tree branch or a piece of wood. Even owls without tufts, such as Boreal and Saw-whet Owls, have been observed to assume tufted poses when alarmed. Because of its size and coloration, a Northern Pygmy-Owl sitting on a branch of a Douglas fir can resemble a fir cone.

In his book, The House of Owls, artist and writer Tony Angell says that a series of Screech Owls lived in a nesting box he put up by his home in Northwest Washington. Sadly, one day after twenty-five years, he discovered that a Barred Owl had hunted down and captured its current resident. “The discovery of Barred Owl castings containing the feathers of the Western Screech Owl provided evidence of their role in the disappearance of our owl family.”

3. OWLS HAVE NO TEETH 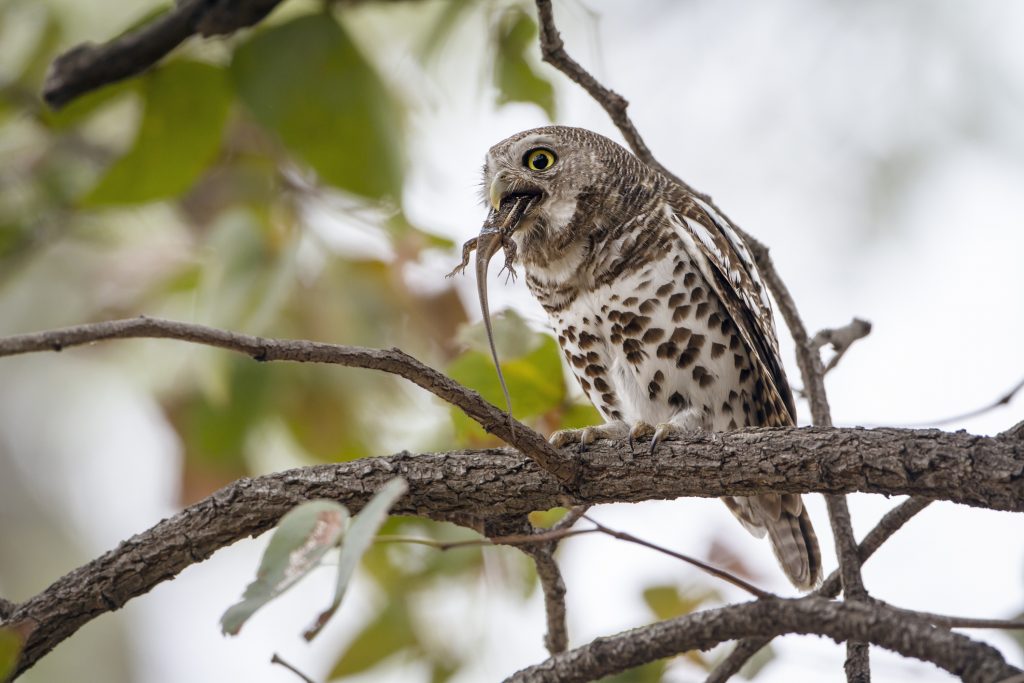 They swallow their prey whole or first rip it into big chunks with their talons and beaks.  The parts that an owl’s stomach cannot digest are deposited in its gizzard and compressed into pellets and spit out later.  Fur, feathers, bones, teeth, everything gets regurgitated.

Companies such as Carolina, Educational Innovations Inc., pellet.com and others sell owl pellets to schools and others to dissect in the classroom as a way to learn about the owl’s role in the food chain.

4. SOMETIMES AN OWL IS LIKE A CANARY IN A COAL MINE 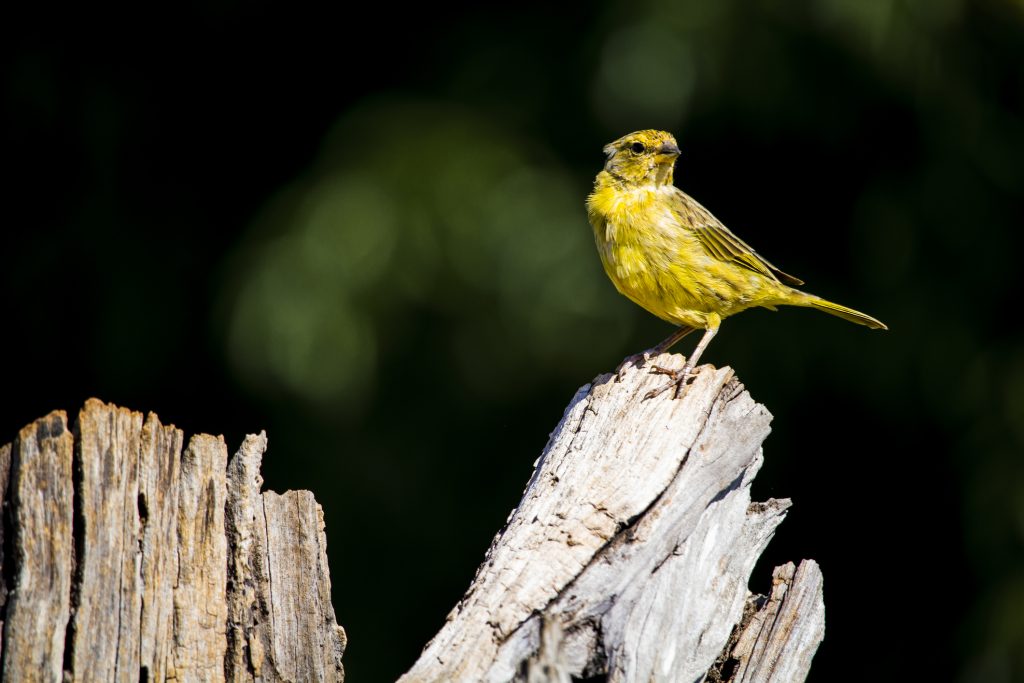 Owls are often an indicator species.  What does that mean?  An indicator species reflects the general condition of its habitat.  If conditions in a habitat are in decline, for example, with fewer critters around or new critters taking over and radical changes happening to the natural flora, the owl population of the area will reflect those changes.

Female Owls are larger than male owls.  This is called reversed size dimorphism, which is common with most birds of prey, including hawks and eagles.   There are probably several reasons for this.  Males are the primary hunters in a pair.  Females remain in the nest incubating and tending the fledglings, while the male hunts and delivers prey for hunger mouths.   The male needs to be agile, fast and efficient.  Females need extra energy for producing and incubating eggs.

6. HOW MUCH WOOD WOULD A WOODPECKER PECK — IF IT KNEW IT WAS BUILDING ITS NEST FOR AN OWL? 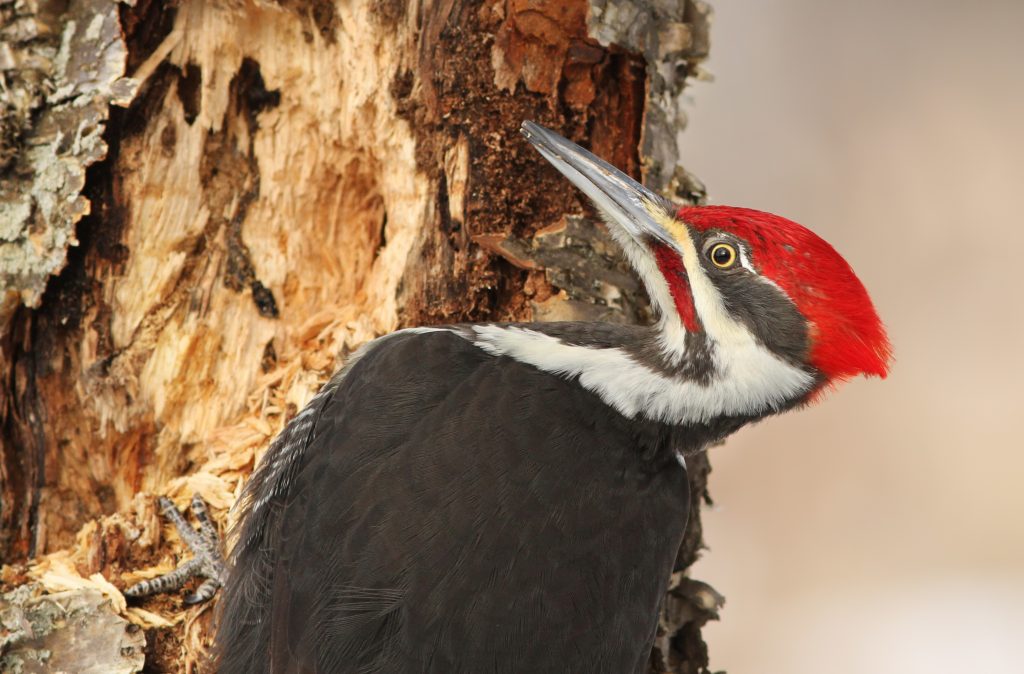 More than half of North American owls rely on woodpeckers for their nests. The Pileated Woodpecker, featured in this photo, is one of the biggest woodpeckers and it makes the larger nest holes that many owls prefer.

In addition to bird nests, some owls, like the Western Screech Owl, will use natural cavities and nest boxes built by humans.  Tony Angell built a nest box by his house, which various Western Screech Owls used for a quarter century, as he explains in the fascinating first chapter of his book The House of Owls.

Larger owls, such as the Western Spotted Owl and the Northern Hawk Owl, require bigger nests than most woodpeckers make.

Short-eared Owls are one of the few owls, besides Burrowing Owls, that create their own nests.  The female Short-eared Owl finds a tree cavity to scratch out a nest bowl in, then furnishes it with twigs and feathers.

7. SOME OWLS HAVE EYES IN BACK OF THEIR HEADS

Not literally of course. Pygmy Owls, like the one in this photo, have two false eyes formed by the plumage on the back of their heads.  The purpose of this is most likely to fool predators into believing the Pygmy Owl is on full alert, aware of its predators and ready to take defensive action if necessary, even though it’s looking the opposite direction or taking a snooze with its face resting against a tree. Of course just because it can’t see a predator doesn’t mean it doesn’t know its presence. Owls have excellent hearing.

By the way, the Pygmy Owl does not have a pygmy appetite. It hunts birds much bigger than its 6 ½ inch height, including California quails twice its size.

8. OWLS CAN TWIST THEIR HEADS IN ALMOST ANY DIRECTION 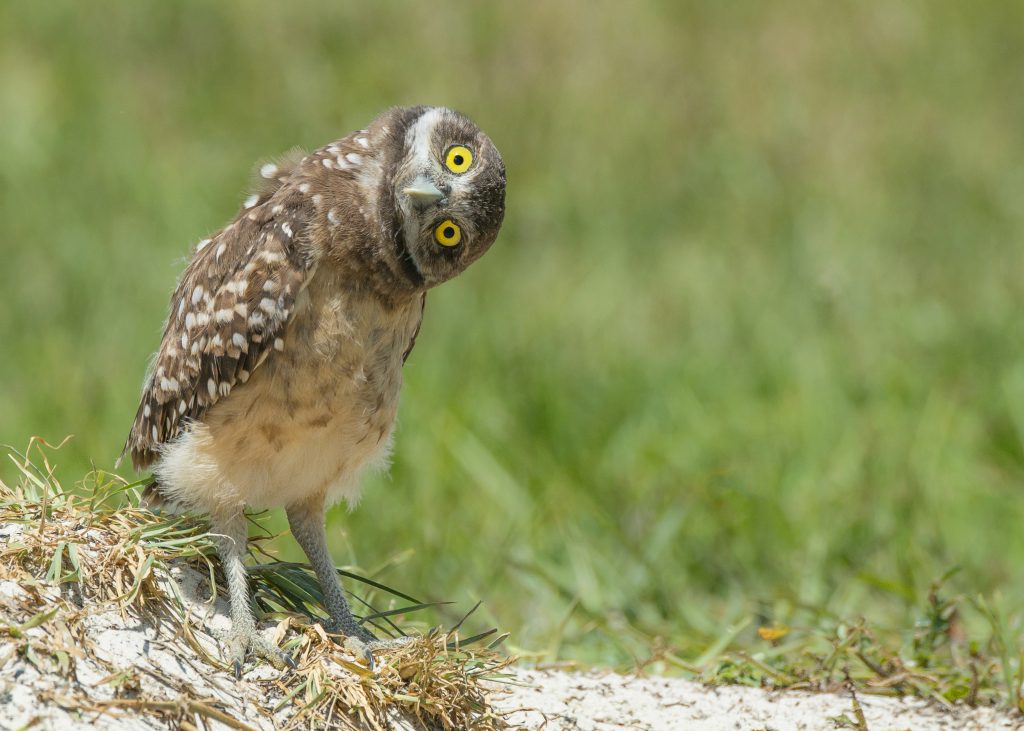 One of the creepiest movie scenes of all times is when the girl in The Exorcist turns her head 180 degrees and looks at us from her backside. Owls can do that.  In a recent episode of Family Guy, Meg informs Peter he’s reading the newspaper upside down. “You’re wrong,” he says, putting the paper down to reveal his head twisted upside down. Owls can do that too.

English folklore has it that you can get an owl to strangle itself by having it watch you walk around it in a circle until it chokes.   Obviously, this won’t work.  The bird is not stupid.  But its neck is pretty bendy.

Owls can turn their heads 180 degrees in either direction and move them up or down 180 degrees.  To do this the owl has a valve system that keeps sending blood to its brain even as its neck is twisted. It also has twice as many vertebrae in its neck as most mammals, including humans.  The reason the owl has adopted this extraordinary rotational range is that its eyes are fixed in its skull and do not move around inside its eye sockets like ours.

9. BARN OWLS HAVE ADAPTED TO LIVING AMONG HUMANS 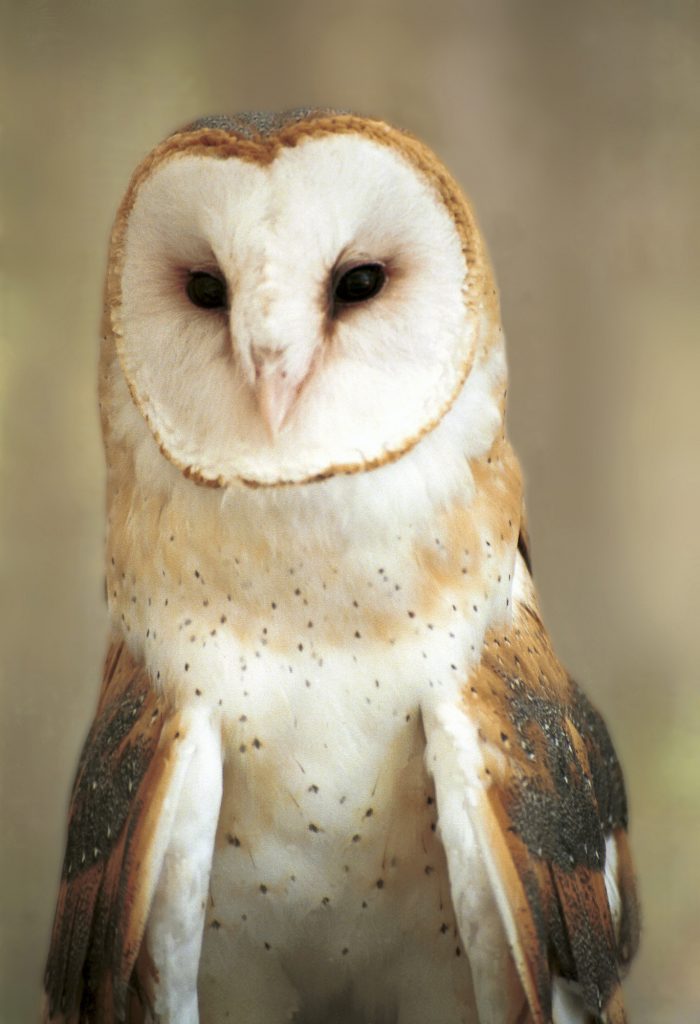 Just because their faces look sort of human has nothing to do with it.  Unlike many other owl species, which are disappearing because of humans, the barn owl has adapted well to living with humans.  It can be found in most of the lower 48 states and Southern Canada.   Its favorite meals are rats, mice and other small rodents commonly inhabiting urban and suburban areas.   It’s easily identified by its monkey faced appearance.

Barn Owls are a member of the Tytonidae family — the only North American owl not a member of Strigidae family.  All owls are birds in the Strigiformes order.

Other owls, like the Western Screech and Barred Owls, have also adapted to human presence and can be found in parks, backyards, particularly where old trees are present.

10. YOU CAN CATCH MORE FLIES WITH POOP THAN VINEGAR 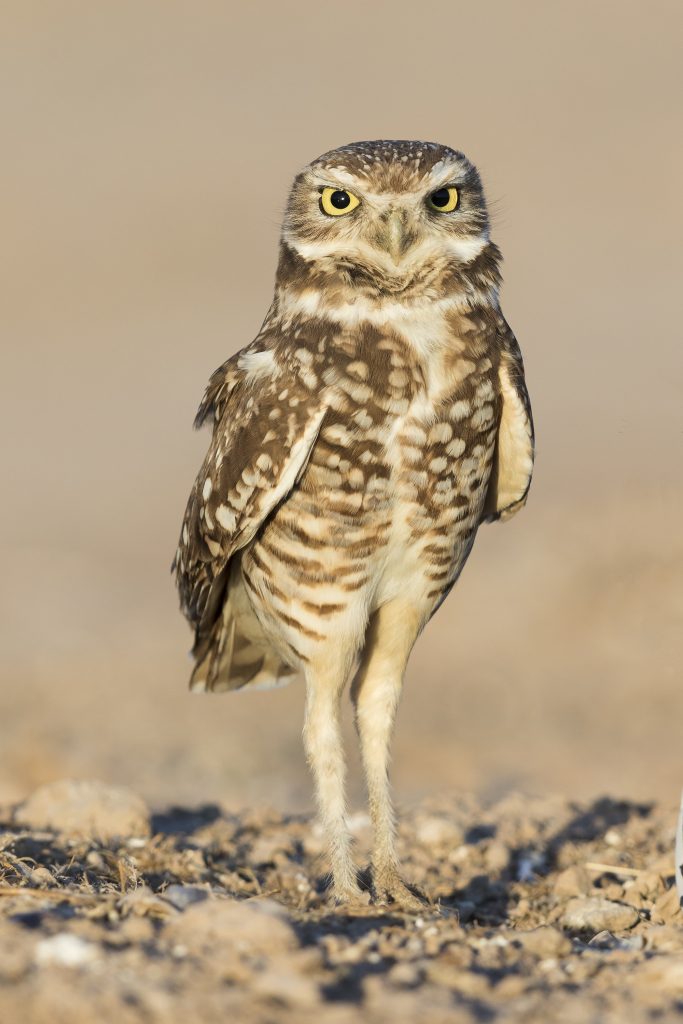 That’s what Burrowing Owls do.  They decorate the entrances to their tunnels with feces to lure insects and other small prey — and, some experts think, to ward off predators with a better sense of smell.

Unlike other owls, which tend to be solitary, Burrowing Owls are gregarious and congregate in colonies. Found in dry landscapes on the Great Plains and western states, they build their nests in burrows found in short grass located near long grass where they hunt for larger prey.

11. MORE PROOF OWLS HAVE A LOUSY SENSE OF SMELL 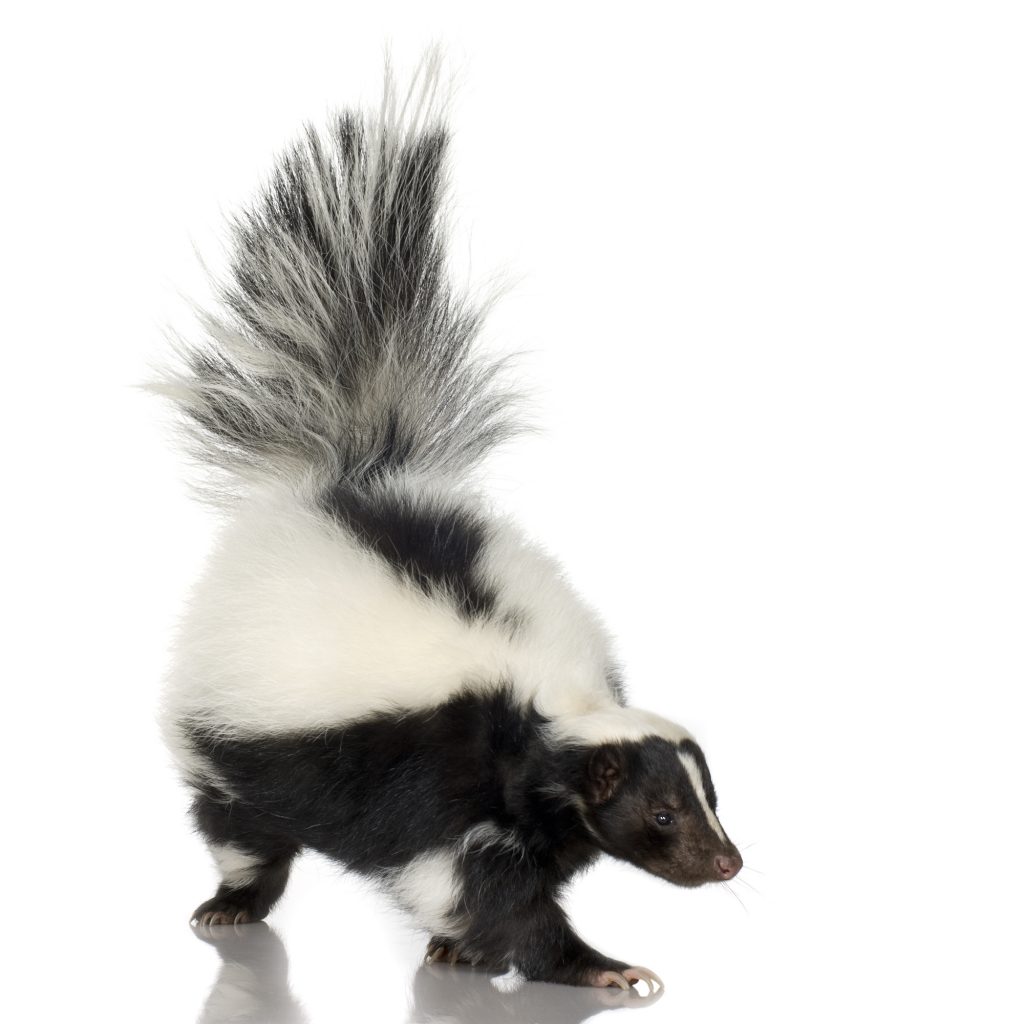 It’s not just Burrowing Owls. Owls, in general, have a poor sense of smell. The Great Horned Owl, which hunts everything, including mice, rats, marmots, rabbits and other owls, also hunts skunks.  Doesn’t bother them a bit. 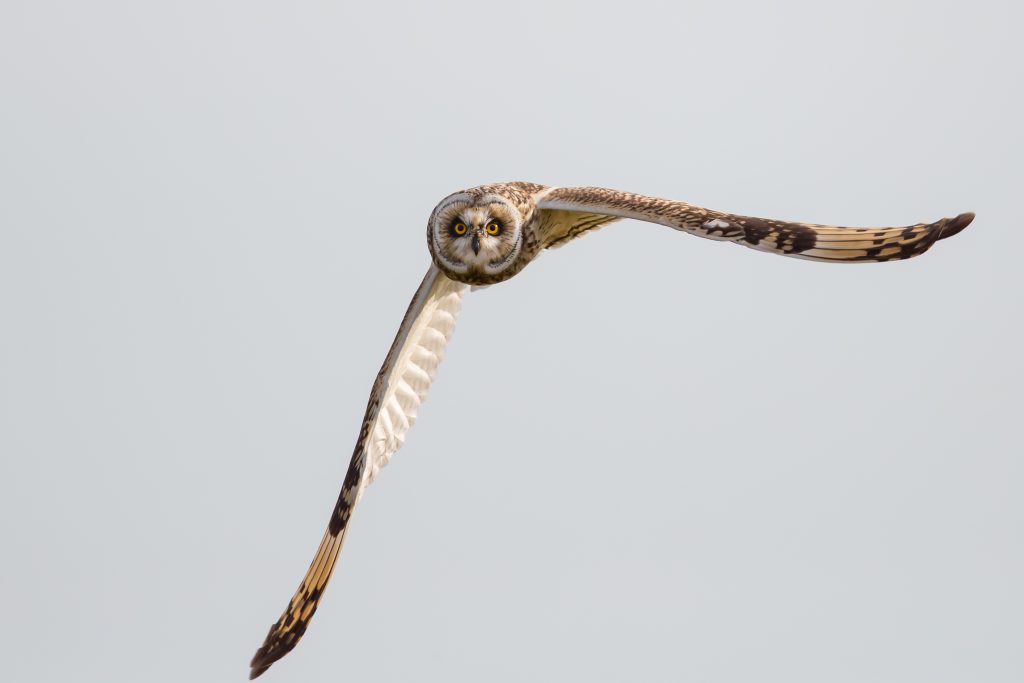 The owl’s wings, which are longer than most birds, are designed to minimize noise, with feathers that muffle sound.   Owls with very long wings, like the Short-eared Owl in this photo and Long-eared Owls, have very low wing loading.  This allows them to hover or change course in mid-flight and pounce on their prey with great agility.

13. WHAT YOU SEE IS NEITHER HEAR NOR THERE 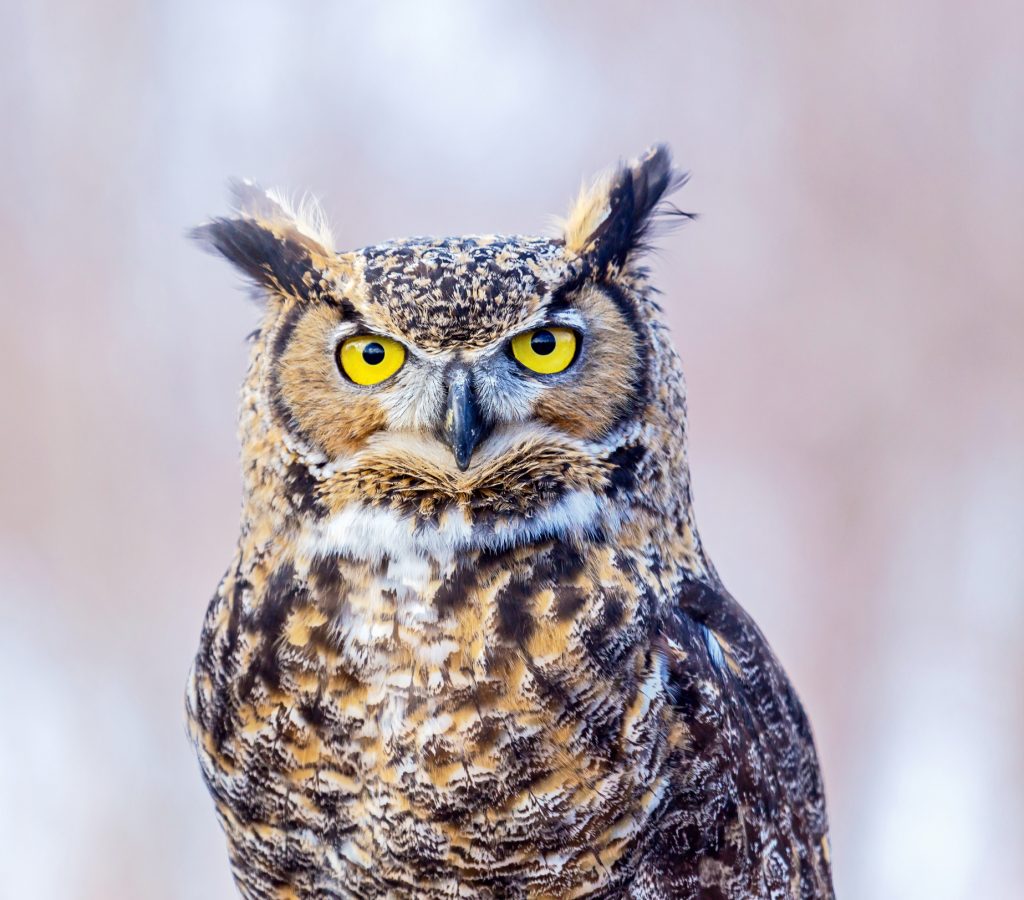 What appear to be ears in certain owl species with earlike tufts on their faces, like this Great Horned Owl, are not really ears at all.  All owls hear through slits covered with feathers just behind their eyes.

The range of sounds heard by owls is similar to what humans hear but owls hear certain frequencies much more acutely, enabling them to detect the movement of their prey.   Some experts think the false ears on some owls are intended to make them look like mammals, which may deter some predators. 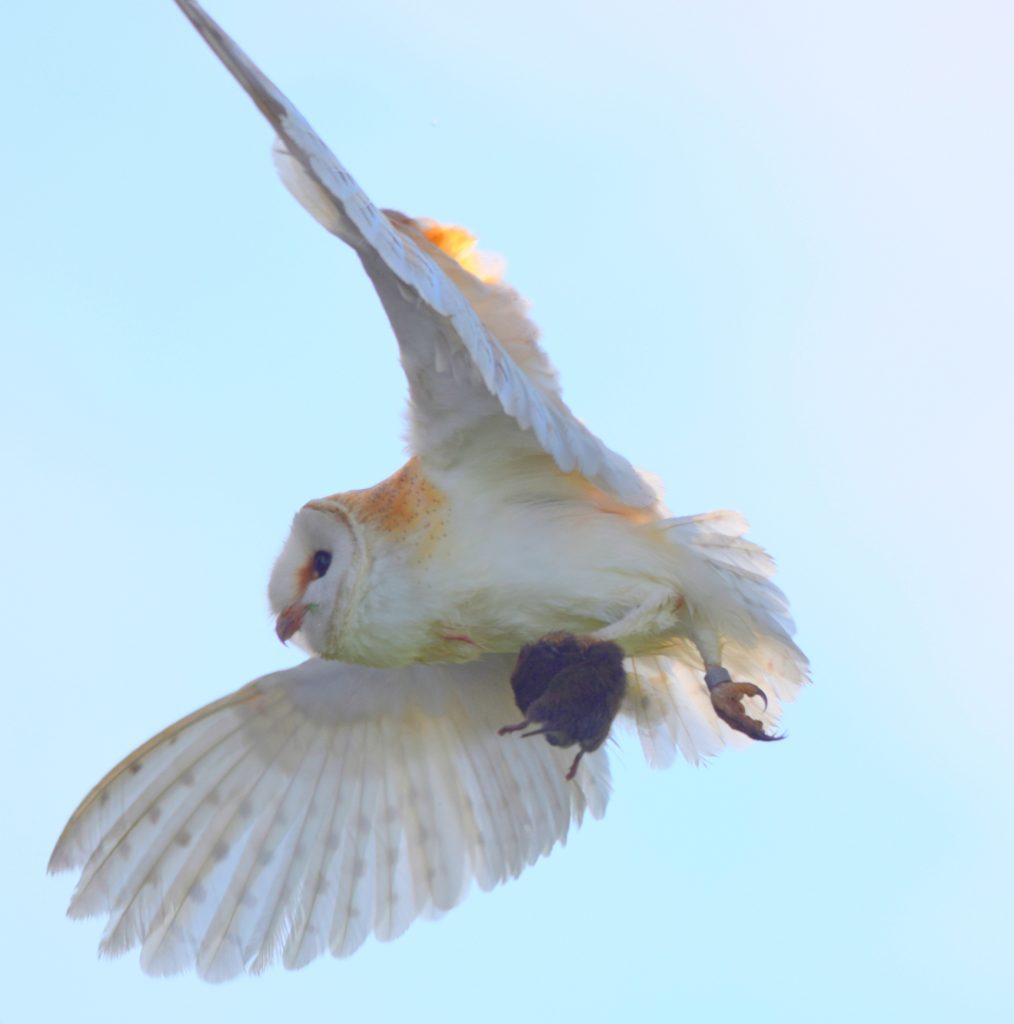 A few strictly nocturnal owls, like the Barn Owl (shown here), have asymmetrical ear openings and a scooped out facial disk, somewhat like a radar or satellite dish (for a closer look at the Barn Owl’s face take a look at #9 again).  The asymmetry of its ears enables the Barn Owl to pinpoint the exact location of its prey as it analyzes the sound waves hitting and bouncing off its facial disk.

Owls generate a mental image of their prey’s location and stay on track, approaching it with talons outstretched and positioned to strike. The owl’s medulla (the part of the brain associated with hearing) is three times bigger than a crow’s.

15. NOT ALL OWLS ARE NIGHT OWLS 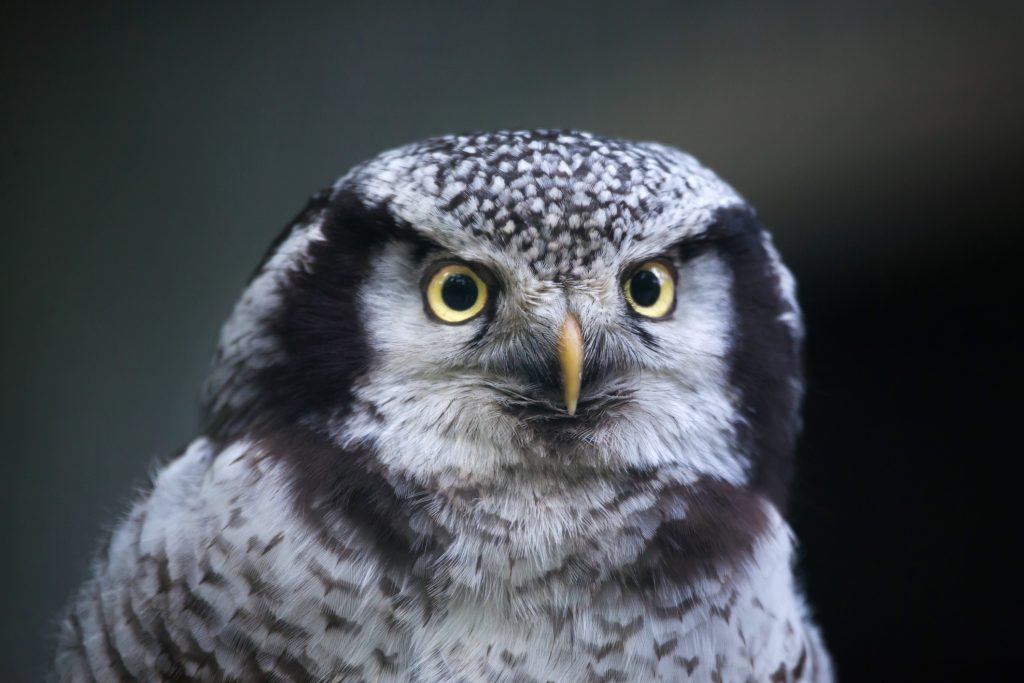 This owl, the Northern Hawk Owl, is diurnal. It hunts during the day. Even though about 60% of owls are nocturnal, some are diurnal, and a few hunt at dusk and dawn (crepuscular).   In general owls with yellow eyes are diurnal (Northern Hawk Owl and Northern Pygmy Owl); owls with orange eyes are crepuscular (Great Horned Owl); and owls with brown or black eyes hunt at night (Barred Owls, Northern Spotted Owls).

16. HOW DO OWLS DRESS BEST FOR SUCCESS? 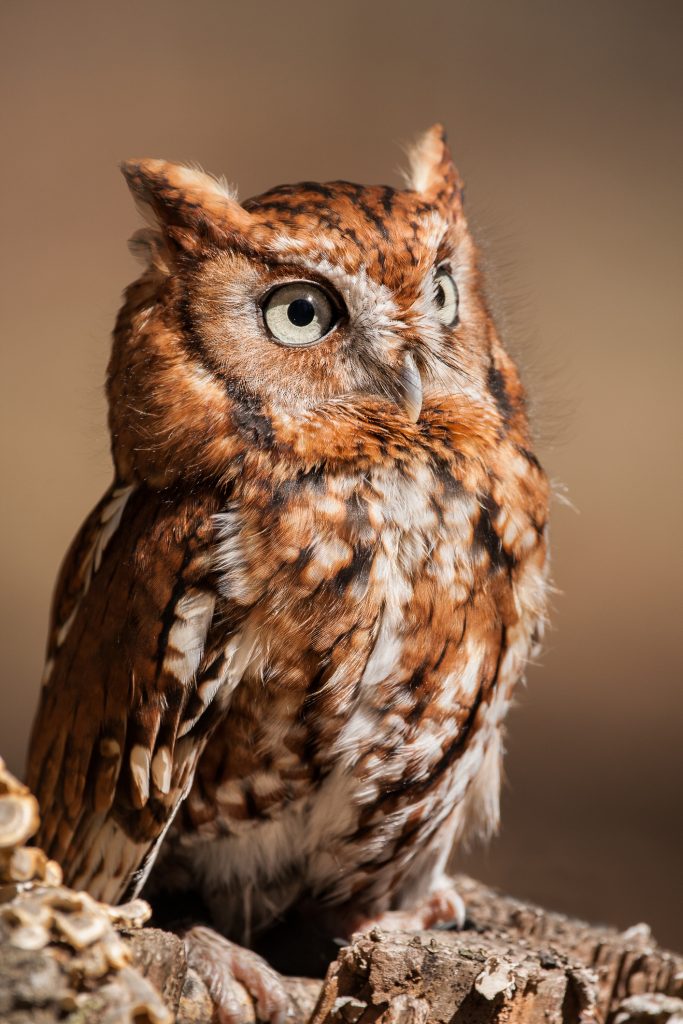 Red or rufous owls are more difficult to see at night and when it’s cloudy.  This gives them a competitive advantage over grey owls.  The Eastern Screech-Owl, which has the widest color range of any North American owl, comes in both shades, grey and rufous.  The downside for owls with rufous feathers is that their feathers contain less melanin than greys.  Melanin makes feathers more durable.  Darker feathers also dry faster and generally offer better circulation. Some experts think this is why darker Eastern Screech-Owls have a higher survival rate than lighter, rufous ones.

17. ARE OWLS REALLY THAT SMART? 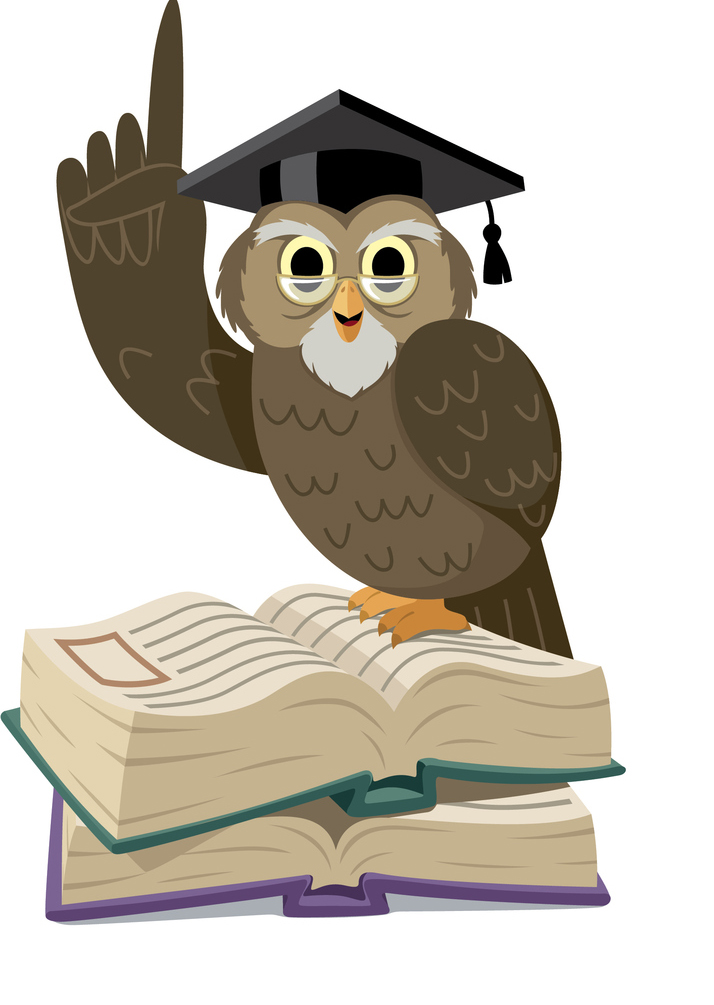 In Greek mythology the owl is linked with Athena, goddess of wisdom. Sanofi uses an owl to hawk its over-the-counter allergy relief drug Xyzal — because presumably, owls are even smarter than doctors. Owl characters from Merlin’s Archimedes to Harry Potter’s Hedwig illustrate not only the owl’s wisdom but courage and initiative.

In reality, an owl’s brain is about the size of a golf ball.  Owls use one-third of their brain to see to see with, one-third for hearing and one-third for brainy stuff like locating prey.  What they are singularly well suited for is hunting.  Not prescribing drugs, predicting the future or dispensing wisdom to humans.

On the other hand, owls have those great big eyes and we tend to associate big eyes with intelligence. They also look somewhat human. Especially the Snowy Owl and the Barn Owl. And of course, we think humans are smart, so owls must kind of be too.