In the movie Baby Driver, Deborah (Lily James) tells Baby (Ansel Elgort) she admires his name because lots of songs are named for “Baby,” but she only knows one named “Debra,” by Beck. Baby knows one, too, “Debora” by T Rex, which singer/songwriter Mark Bolan makes rhyme perfectly with zebra, as “he could speak British English fluently.”

There are in fact at least ten songs about women named Debra or a variant thereof, including “Debbie Gibson is Pregnant with My Two-Headed Love Child” by Mojo Nixon. Rol, a witty but “humble music fan from the north of England,” documents them in one of his blog posts: http://histopten.blogspot.com/2015/11/my-top-ten-debra-deborah-debbie-songs.html 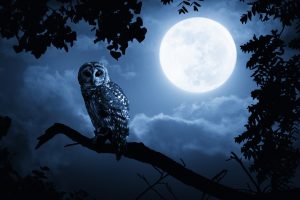 When I started researching songs with “Night Owl” titles, I felt a little like Baby’s girlfriend Deborah at first. You mean there’s more than a couple of Night Owl songs? I could only think of Gerry Rafferty’s “Night Owl” and the Tony Allen “Night Owl,” mainly because I knew the Frank Zappa cover.

But I soon began to feel like Mickey as the sorcerer’s apprentice in Fantasia. Where did all these “Night Owl” songs suddenly come from? Doo wop Night Owls, folk rock Night Owls, hip hop/R&B Night Owls, country Night Owls, even heavy metal Night Owls. Eventually, I found more than two dozen different Night Owl songs written and recorded since 1951 — and I’m sure there are more out there. In fact, “Night Owl” song titles outnumber any other titles with the word “owl” in them, such as “Hoot Owl Boogie,” “Screech Owl Blues” and “Owl Lullaby.” (I’ll be writing about these in a separate post soon.)

So when I saw an article titled “What’s the Most Common Billboard Hot 100 Song Title?” I thought for sure “Night Owl” would make an appearance. To get mentioned in the article though, the title had to make the Chart at least 10 times since 1958. The number of times “Night Owl” made the Billboard Hot 100 — at least in the U.S., since the UK, Australia and Europe have their own charts — is exactly once.

The earliest “Night Owl” I could find is a blues tune written in 1951 and sung by Lowell Fulson. The most recent “Night Owl” I’ve turned up is an electronic pop tune by Joseph Mount’s Metonomy released in 2016.
Between 1951 and 2016 at least 24 additional “Night Owl” songs have been recorded and released.

One of the reasons there are so many Night Owl songs is the versatility of the concept. We generally think of night owls as people who stay up late and party a lot. That’s the most popular theme for a Night Owl song. But there are several others.

The first use of the term “night owl” to refer to a person was in Shakespeare’s poem “The Rape of Lucrece” in 1594.

… his guilty hand pluck’d up the latch,
And with his knee the door he opens wide.
The dove sleeps fast that this night-owl will catch

Human night owls may not be predators exactly, even metaphorically, but the term fits those who appreciate the freedoms of the night, the liberty to do things that daytime people are constrained from doing, to be expressive and maybe a little wild. This is the general profile of a night owl. They love the night time.

That’s what the “Night Owl” songs by these artists are about: James Taylor (folk rock), Eric Bellinger and Kito Dickson (R&B/hip hop), and even Foxes and Vaya Con Dios (pop).

But not everyone wants to be a night owl. Artists in some songs complain about being night owls, how it’s a condition their lovers have forced on them. Lowell Fulsome (blues) says, “I’m just a night owl, I roam the streets from dusk to dawn” looking for his lover. Kathleen Kruze (country) stays up all night. She can’t “get no rest,” she’s “just that obsessed.” The female voices in Little Big Town (country) sing, “I’m a night owl waiting for you.” And Metonomy’s Joseph Mount (pop) taunts his girlfriend who’s on the verge of leaving, “So let’s imagine right now/I’m just another night owl.”

Then there are the songs about how to deal with your night owl lover. Tony Allen (doo wop) has decided he’s had enough and tells his woman, “I know what you been putting down” and “there’s no reason to hang around. So long night owl/Be on your merry way.” Wilson Pickett (soul/R&B) issues his “night owl” a similar warning: “You gonna stick your key in my door/And you find it don’t fit no more.”

Gene Chandler scolds the teenage night owl he knows. “Your daddy told you long ago/Not to come in late no more.” Madeline Adams (folk/indie) tells her sweetie, “I don’t want to be a night owl,” and “if you love me in the day time darling/I never will.” Glen Shorrock and the Little River Band mock the night owls but can’t deny that “They have a need to rock and roll.”

The Night Owl as a State of Mind

These are the conventional night owl narratives. In 1979 though Gerry Rafferty took the night owl concept and shaped it to explain his own internal struggles. Gerry started to give the night owl concept an added dimension. Other artists who followed Rafferty would do the same, like indie folk artist Mree, rapper Phora, and death metal band Sadist. They may not even use “Night Owl” in their lyrics. The Night Owl becomes a symbol of their inner world.

The Night Owl Call to Action

Though as different from each other in style as a hawk from a handsaw, folk song writer Steve Tilston and Philo heavy metal band Slapshock have written songs about taking a stand. Steve Tilston’s lyrics use the night owl’s return as the signal to the people of Northeast England in the 10th century that it’s time to take arms and resist the Viking invaders. Slapshock likens its pride and resilience to the ubiquity of owls in the night.

Howard Tate wants advice on how to get his girl back in his soulful “Night Owl.” John Sebastian pays tribute to the famous Night Owl Cafe in Greenwich Village where he and others like James Taylor got their start in the ’60s. And folk singer Willie Aames actually wrote a song about a real night owl, capturing a rat to enjoy eating back in his nest.

I’ve written detailed entries about each Night Owl song, including the three instrumentals, in groups of chronological order. Also, here is a list of the songs by genre hyperlinked to their entries: